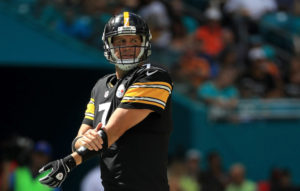 According to the ESPN.com, “Steelers quarterback Ben Roethlisberger has a chance to play Sunday against the Baltimore Ravens, even as a backup quarterback.” “Although Adrian Peterson has started rehab for his knee injury, he is not ready to start running. “It’s still going to be a while before it’s safe for him to run,” Vikings athletic trainer Eric Sugarman told the Minneapolis Star Tribune. Alex Smith got beat up something bad against the Colts, routinely taking hits big enough for his wife to openly question what the referees were doing. Smith was eventually removed with what the Chiefs described as a concussion, but now the team says he never suffered one. According to the KC Star, “Chiefs running backJamaal Charles needs a second surgery on his right knee. He has been placed on IR. Jared Cook (ankle) is “making a lot of progress” in his return from injury, according to coach Mike McCarthy, but still may be unlikely to practice this week. Pats RB Dion Lewis is practicing and may return in week 10. It appears that Miami Dolphins tight end Jordan Cameron will be sidelined a fifth game because of the concussion he suffered in late September. Falcons running back Tevin Coleman could miss his second consecutive game because of a hamstring injury. Coleman did not practice with the team Tuesday in preparation for Thursday night’s game at the Buccaneers. Head coach Hue Jackson said Monday that Corey Coleman (hand) has been cleared to take the practice field.