Fantasy Contrarian: Gronk worthy of a 1st round pick?

Should You Take Gronk in the First Round?

A tight end with your first round pick? Am I absolutely insane? Maybe, but not because of this. That’s a whole different story. Rob Gronkowski is an absolutely legitimate first round pick for a few reasons – not just because he’s the ultimate party animal. You don’t get points for that (at least not in the leagues I play in).

Gronk is a rare specimen that produces major points at a generally weak position. This gives him a special sort of value that most tight ends don’t carry. He’s going to outscore the other tight ends in your league by quite a bit, sometimes its laughable how much better he is than the 5th through 10th best tight ends that other owners will be starting. That’s what happens when Gronk snags a touchdown or two every game and racks up 100 yards along with it. It gives him an incredible advantage in fantasy (and in real football too). Back to back seasons of 1100+ yards and 11+ touchdowns and he was the best TE in 2015 by 26 points. If you punted TE and ended up with the 10th best, Gronk nearly double his total.
Since Gronk is head and shoulders (and probably knees and toes, too) above the competition, he gets treated differently than other tight ends. He brings so much value to the table that it justifies grabbing him with your first round pick. While other owners will be praying for 10 points in a week from Antonio Gates or Jimmy Graham (ouch), you’ll be wondering whether Gronk is going to drop 20 or 30 this week. You’ll have a ridiculous advantage on other owners at this position that gives you the leeway to take more risks elsewhere on your squad. The moral of the story: If you want Gronk in the first round, go for it. He’s worth it.

Rob Gronkowski has been everything the Patriots could want, and more. He has been absolutely dominant at practice so from according to Patriots inside reporter Bernd Buchmasser, to the point that we hope it doesn’t ruin the confidence of Patrick Chung or Jordan Richards, the poor saps who have been forced to cover him at Patriots training camp. Trust, you will want to treat this guy as a #1 WR in fantasy this season. Yes, Julian Edelman is the #1 WR target technically but keep in mind Tom Brady led the Patriots offense with 1,106 of a possible 1,119 snaps (98.8 percent), and only one other player was above 80 percent — Rob Gronkowski (84.1).  This guy is a monster when it comes to the redzone also, he is putting up record numbers at the tight end position. Not to mention he has the best Quarterback of all time passing to him, let’s take a look at one way the Patriots scheme works in the redzone and how unstoppable Gronk can be. 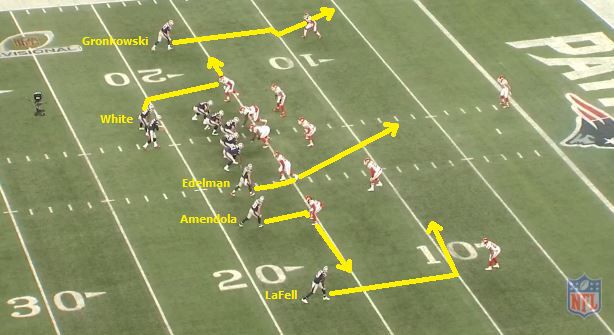 Gronkowski was originally lined up on the outside shoulder of left tackle but Brady changed the play pre-snap to flex Gronkowski out to the far left. Kansas City again played man-to-man coverage across the board with a single high safety over the top. The defense rushed four with two linebackers dropping into coverage of the underneath zones. 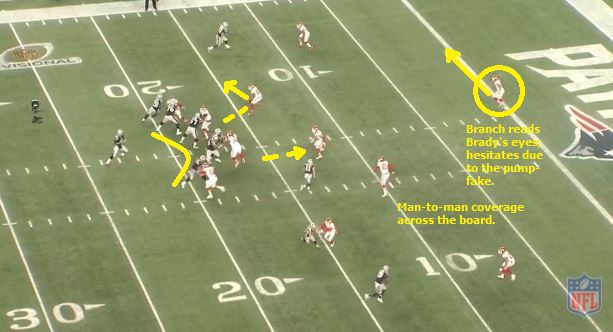 After the snap, the offensive line did another good job of giving Brady enough time in the pocket. 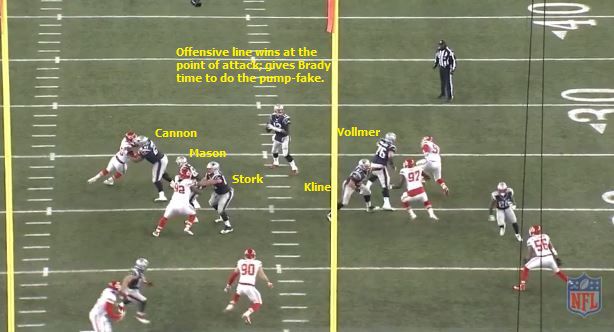 Because he had enough time in the pocket, Brady was able to use a pump-fake to freeze safety Eric Berry, who was in coverage of Gronkowski. The All Pro Berry bit on the combination of Brady’s pump and a fake hook route by Gronkowski, who instead of turning around for the ball, headed back up towards the endzone 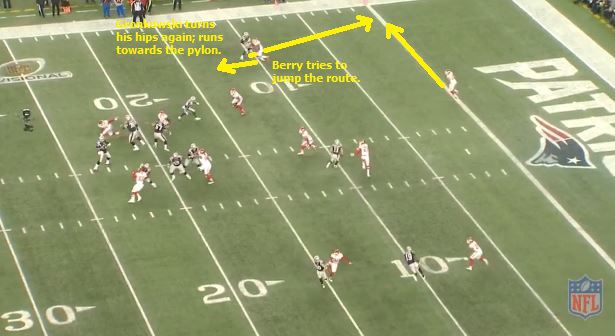 Brady delivered a perfect touch pass to Gronkowski, who caught it at the 2-yard line and reached the endzone for his second touchdown of the day. Despite Tyvon Branch recognizing the route quickly and tackling Gronkowski immediately after he caught the ball, the tight end was able to hang onto the football for the score.

Earlier in this same game Gronk scored on a picture perfect redzone play designed just for him: 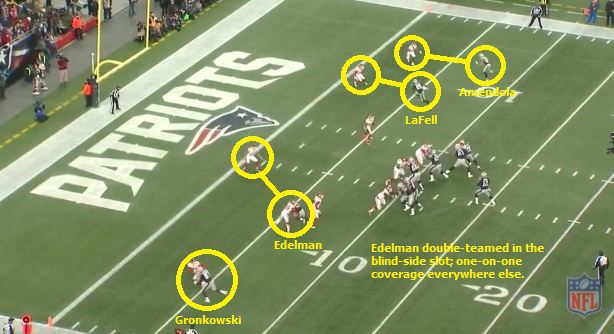 6’6 Gronkowski beat 6’3 cornerback Sean Smith at the line of scrimmage by faking an inside release but immediately cutting up the field; he beat him at the goal line by turning back towards Brady and by being physical at the top of his route (referee Craig Wrolstad called a good game and let both teams play; rightfully no flag for offensive pass interference was thrown). Brady delivered a perfect pass to where only the tight end was able to catch it: 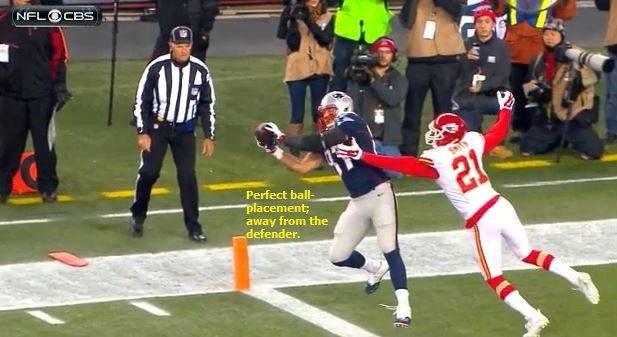 Bottom line, Gronk is worth it!

New York puts Daily Fantasy Sports Back In BusinessIs there a such thing as a “Sleeper” anymore?